Hair on Board! [PIC] 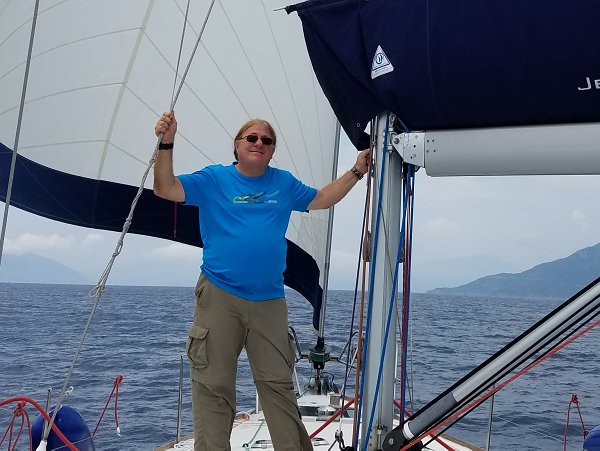 Not exactly a good hair picture, since in it my hair is tied back and not really visible. But I thought I'd post because I just returned from a one-week sailboat charter in Greece with my sailing club (Anthony, take note!) and had a great time.

Although long haired men are not common in Greece, it seems they are less UNcommon than in other countries where I've been recently: Australia, the USA, and Israel. In Greece, one occasionally even sees older men who are balding on top, un-self-consciously wearing whatever hair remains for them long and untrimmed. I'd noticed this when I lived in Greece many years ago - I left 29 years ago and hadn't been back until last week - and was pleased to see it was still the case.

Now what I learned, sailing for a week with long hair. (Note: this was aboard a 49-foot yacht, not exactly roughing it.) It doesn't really get in the way, at least not enough to complain about. I kept it tied back, just as I usually do; a few times when walking around in an island town, I ripped off the tie and pretended I was an older, fatter version of Yanni, sitting in a kafeneion with my eyes closed, hearing New Age piano music in my head. I brought along small bottles with my favorite shampoo and conditioner, knowing that I would surely dive into the sea at some point and need to wash. Although it can get windy on a sailboat - duh, wind is what sailing's all about! - I just brought a few extra ponytail ties in case I might lose one overboard. Although I did not bring along a blow-dryer because I use one only occasionally, a woman in the crew brought one and used it daily; as long as we were hooked up to shore electric or had the engine running we had 220V/50Hz power, so she could use it. (And on a sailing yacht in a place like Greece, one unfortunately sails much of the time with help from the engine; winds are not always strong or blowing in a direction optimal for your destination, and on a one-week charter you tend to want to maximize your island visits.)

Anyway, it was a wonderful way to unwind for a week, highly recommended if you get the chance! Best wishes to all for a good week ahead...