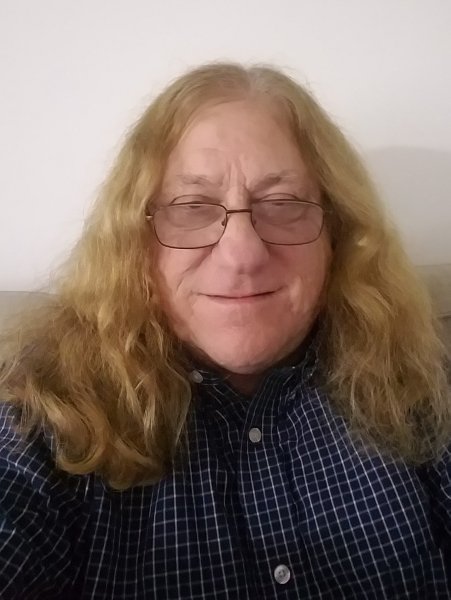 I realized I hadn't posted an update on the board in some time, so here it is!

As you can probably tell from my picture, I have cut my hair back in length some. After discussing with my hairdresser that I wanted to transition to wearing my hair unbound more of the time, she suggesting taking a few inches off and doing a bit of layering. That was back in early November if I remember correctly. I have been in school full time in 'ulpan,' which is a full-immersion Hebrew language program for recent immigrants in Israel. The ulpan I chose to attend is in Tel Aviv, which is a very 'hip' city in contrast to Ashqelon, where I live, which is much more conservative. I've been enjoying wearing my hair loose most of the time as I ride the train to TLV, circulate in TLV, attend class, and ride the train back home. Apart from occasionally getting a little hair pull when I put on my backpack, I like wearing it loose! I do get some hostile-looking stares, almost exclusively from women. It's interesting that, for many women, if a man grows his hair long he's somehow invading some exclusive female territory. Ah, who cares??!

In the same time, Clara and I have bought and moved into a new-ish apartment in Ashqelon, with four bedrooms, so I finally have my own library/workroom for the first time in years. It's in a nice neighborhood, with conveniences nearby and a sea-view from our balcony. Of course, as soon as we moved in we had to do some renovations. Clara now wants a new kitchen. This, even though I'm the cook more often! But, never mind! She'll have her kitchen...and I'll enjoy using it!

I also bought a sailing boat, in England. She's sitting lazily on a mooring on the River Hamble, waiting (patiently, I hope) for me to pay attention to her and bring her down to the Mediterranean. The plan is to cross the English Channel in her in the summer, take her through the French Canals to the Med by late August. Anthony, I'll have to find out where you live and see if I can work your town into my itinerary! Imagine an Anglican Priest and a Rabbi, both with long hair, enjoying a sail! (We'll have to twist Raymond's arm into coming, too! Do I see the opening of a joke in there??! Ah, never mind!) Perhaps I'll leave her in the South of France while I return to Israel for the high Holy Days, then go back and coastal-hop along the north shore of the Med, to Greece and leave her there for the time being.

I've wanted to have a sailboat for many years. I did have a boat briefly when I lived in Australia, but had to sell it when my tenure in the country became uncertain. Now that I'm retired, and permanently living in Israel, I decided to find The Boat; I had to go all the way to England to find what I was looking for! (She's a British-built Colvic Watson.)

So that's the update. Hoping everyone else is doing well and surviving winter and the dried-out hair it brings!