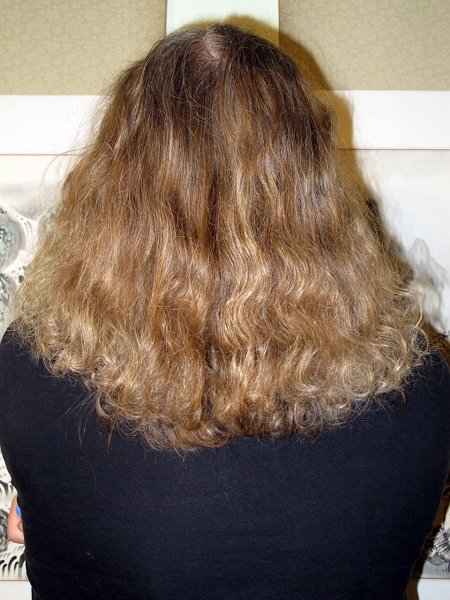 It's been a long time since I've left a note here and even longer since I've posted a photo. It's been ages since I could say I had long hair... longish now, I guess ;p . Used to post monthly updates years and years back, until I was diagnosed with male pattern baldness... and on top of that, the wife (back then) hated my long hair, so one night in a fit of rage, she took a pair of scissors & my hair was gone in a matter of a "snip" ;o .

Well, time seems to mellow everyone a bit - in some ways more than others... my wife now accepts me for who I am - long hair and all, which is great ^_^ . Nearly 14 years of marriage and understanding will do that to a couple, I guess ;p heh~

Anyways, here's a photo taken this evening... think I've been growing my hair out for two year now ;o ? It doesn't seem to grow as fast as it used to - especially with age, but at least I haven't lost it yet xD ak!

One member here who remembered me from years past asked a while back how things were with my hair. My answer - surprisingly fine ;p ! My wife put some detangler in my hair this evening, took a photo from behind and truthfully, I was quite a bit shocked ;o ! I've hardly paid attention to my hair since I started growing it out again (afraid to look in the mirror - afraid to see that I might be losing my hair, maybe - eventually looking like my dad/grandad someday ;o ~)... but now, by the looks of it (hopefully), things aren't as bad as I had thought ;p (thankfully ^_^ )~

...so a word with anyone facing MPB. If you get diagnosed and treat it early enough, you won't lose your hair ;o (or so the Dermatologist says ;p ^_~ ). There are some nasty side effects with Finasteride... but if you're able to tolerate & are able to get used to it (including learning some tricks, including taking it at night), it eventually evens out in the end :) . Honestly, I think since I started taking the stuff, my hair actually looks better ;o ! Strange ;p ~

Anyways anyways, just wanted to say hi again - cheers to anyone who might still remember me & to those who may not - and also to those who are new :) . I am still here - just in the shadows ^_^ ~