Alive and Well, and Still a Longhair... [PIC] 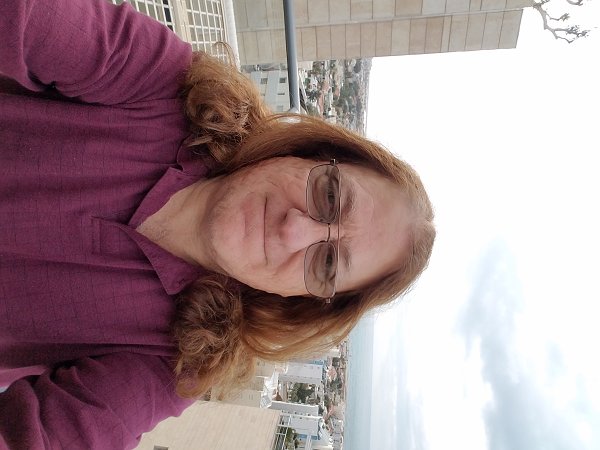 ...but I've now moved to Israel, or in Jewish-speak, 'made aliya.' ('Aliya' means 'ascent,' for when a Jew moved to Israel it is considered to take him/her to a higher spiritual plane.) Forgive me for not posting in a while, the transition has been very hectic. But here I am, enjoying a sunny winter afternoon on my balcony overlooking the Mediterranean. (NOT offered in the spirit of gloating to my friends in the frozen north, but...)

In the selfie taken today, I've just visited my new hairdresser for the first time, to get my colour touched up and ends trimmed. Those who have seen the photos I've posted in the past, may notice that I've shortened my length a bit and am thinking of maintaining this length for the near-term. The reasons: it's still long, but manageable and looks good (in my subjective opinion) when worn loose. And it curls as you see in the picture, more readily and naturally (which I like) than if I let the length go a bit longer.

In the several weeks I've been here, I've hardly noticed any other longhaired men - this in contrast to my last visit about a year ago. There is one guy close to my age in the synagogue I attend, who wears a long queue - longer than mine. But otherwise, it appears that I've plunked myself down in the centre of Buzzcut City. On the other hand, the town where I've settled - Ashqelon - is a rather conservative place; I might find more longhairs in Tel Aviv, which is Israeli hipster central. We'll see when I get up there. That said, nobody has given me even a hint of a hard time or even looked twice as I've walked around with billowing locks.

Nu, best wishes to all in longhair-dom for an enjoyable News Year's holiday and for health, happiness and prosperity in 2017!