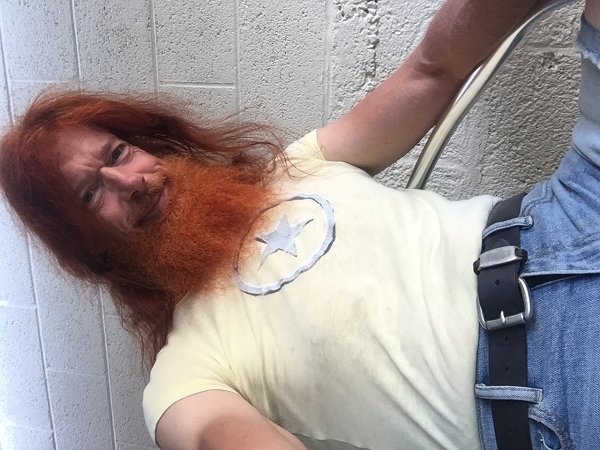 : In 1979, long hair was considered out of fashion, as mid ear was the maximum length in TV land, however older college students may still hold on to early to mid seventies styles.

: I had my first job in 1981, despite the fact that my job councelor in college wanted me to cut my hair to better my chances. I was in and out of unemployment during my more unstable period of the seventies, where I traveled and attended Rainbow Gatherings, in that time when I was "find myself".

: The nineties, came a period of more selflessness as I got more involved in the cause of adults on the autism spectrum. I volunteered some weekends at a camp for people on the spectrum, as I worked on week days.

: In the 2000's I continued giving time to the cause, giving talks, and participitating in a fundraiser called Swim for Hope, in New York City.

: In the times I was involved, I never cut my hair because "I was doing something" with my life. I always refused to cave in to social pressures. The only change in my hair is the greying, and some thinning due to age.

: These days, I had to done down my social implications, as with age, I tire easily, and need my energy to keep working at my job, and I hope, when I retire soon, I will start again.

Thank you for your post, current hair pic, and your bio.It was a brief but an interesting look back on your life and hair history. Obviously you are a born Longhair who has been loyal to not only that cause but to other life events that you stated. You’ve led an interesting life that appears to have been very fulfilling and I salute you for that.In comparison I’ve done the same as you in regards to staying true with my Longhair.Once I graduated from high school is when my hair began to lengthen and to this day it has never been cut short as I approach turning 60 years old in the not to distant future.The only thing I’ve done with it out of the ordinary was to color it with red henna and it had remained that way for the past ten years now. In a way it makes me appear younger since any grey hair is covered up by the henna.I’m looking forward to retirement soon and hopefully maybe, yes maybe, connecting with a lifetime partner.I realize I’ve lived half my life and it’s time to look towards where it may end whenever that day arrives. Bless you for how you’ve conducted your life my friend as you are a sweet man I can tell. Anyway I’ll close with a rare recent picture of myself being I haven’t done one here in ages. Be well and thank you for your participation on this great hyperboard! Cheers